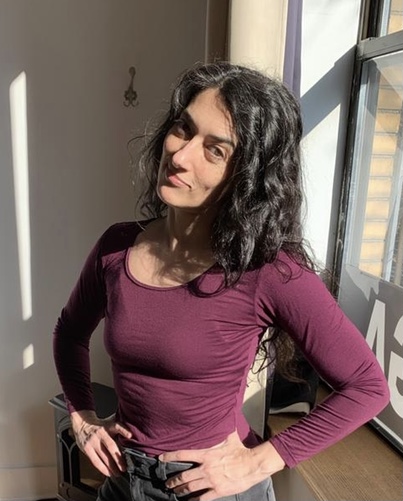 Anna Azrieli is a Brooklyn based choreographer, performer, and teacher. She emigrated with her family from the Soviet Union at age seven and grew up in Queens.

She started making her own work after the birth of her child fourteen years ago. Becoming a parent transformed her physically, mentally, and artistically. Her choreographic work has often been in response to, and redefinition of, her body and mind that made, and continues to grow, another human. Her last show, Mirror Furor, presented by The Chocolate Factory, included her child as a collaborator and performer. Another theme in her dances has been the use of repetitive movement to explore ritualized thoughts and feelings. Several iterations of Averaging, studies of the body as a drinking bird toy, were presented by Gibney Dance, The Kitchen, and New Dance Alliance. Her Skirt Scrum series, an examination of gothic novels and the films based on them, was presented by Danspace Project, Movement Research at the Judson Church, and MR Spring Festival. She made a participatory piece for Elastic City which used a playground as a stage. She has also shown work at Roulette, Open Source Gallery, Catch, AUNTS, Dixon Place. She was a Movement Research Artist in Residence.

Anna has taught dance and movement improvisation through Movement Research, ClassClassClass, Moscow’s TSEKH, and University of Texas Pan-American. She also teaches yoga, pilates, and mindful exercise throughout NYC and privately. She holds a BFA in Dance from NYU’s Tisch School of the Arts. She is currently dancing with Vanessa Anspaugh in a show that will premiere at NYLA in Spring 2022.